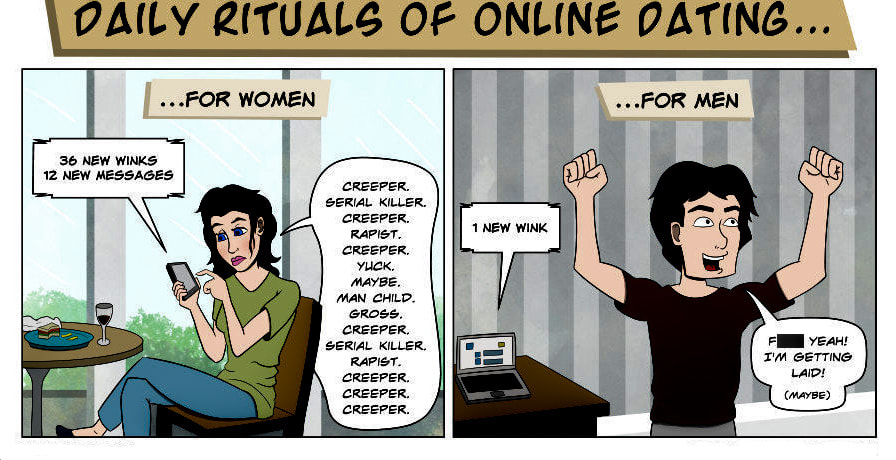 I continously keep hearing men complain about how unfair it is that women have a big advantage in dating, so I wanted to touch on an important topic. ⁣
⁣
That is: “The differences between men and women“ when it comes to Dating in general. ⁣
⁣
Men often think that women have it waaay easier, because they’re being approached by men and don’t have to do anything themselves.⁣
⁣
On top of that they’re getting so many matches on Online Dating apps, even if they’re just using selfies.⁣
⁣
However, this couldn’t be further from the truth, in fact I would even say that women have it harder than men when it comes to dating.⁣
⁣
Let me explain why:⁣
⁣
Imagine you have to be afraid of being judged by society, being seen as “easy“ or a “male slut“ when you want to talk to a woman that you find attractive. ⁣
⁣
Welcome to a woman’s reality. ⁣
⁣
If a woman wants to approach a man, chances are she’ll be seen by him as desperate, easy or a slut, because she’s taking the first step. ⁣
⁣
C’mon, stone age is long over guys..

⁣
⁣
Most men that approach women are either not the woman’s type physically, or they’re simply boring, creepy or desperate. ⁣
⁣
How much does it suck to always have to rely on luck or fate that an attractive man with a cool personality approaches you?⁣
⁣
Me personally, I am happy that I’m not being forced to fulfill this passive role, like women are.⁣
⁣
Same thing applies to Tinder or other Online Dating apps. ⁣
⁣
It’s no secret that women are getting tons of matches, but most of them are either uncreative, boring, creepy, horny or desperate dudes. ⁣
⁣
It’s almost like a full-time job to filter out that one guy who isn’t just attractive but also interesting to talk to. ⁣
⁣
What’s it worth to have an abundance of matches if the majority can just be kicked into a trash bin?

⁣
⁣
After a while this turns into a very frustrating situation. ⁣
⁣
When you finally match with a guy who’s exactly your type.. It turns out that he’s creepy or a sleeping pill.

⁣
⁣
So if you want to complain, you’ll always find a reason to put yourself in the victim role. ⁣
⁣
But not everything is as it seems at first glance. ⁣
⁣
I hope this little reality check could help you see both sides, and not just the “women have it soo easy in Dating“ one.⁣
⁣
Cheers, ⁣Sandric
Cookie-Zustimmung verwalten
Wir verwenden Cookies, um unsere Website und unseren Service zu optimieren.
Optionen verwalten Drittanbieter verwalten Anbieter verwalten Lese mehr über diese Zwecke
Vorlieben
{title} {title} {title}