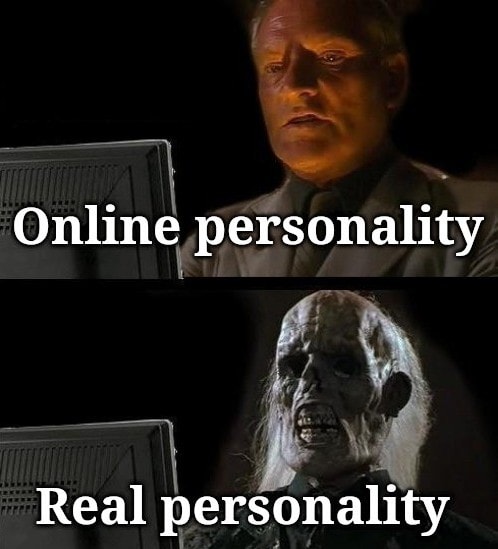 Today I wanted to talk about a very common topic in the community.⁣
⁣
The topic of using copy paste messages, especially those that aren’t authentic and congruent with who you are. ⁣
⁣
You could basically call it “Catfish Texting“. ⁣
⁣
First let me get one thing straight. ⁣
⁣
Online Dating isn’t about just one component. ⁣
⁣
It consists of many different pieces, that in the end create the entire puzzle. ⁣
⁣
There’s the profile, the Mindset, the Text Game, the Date behaviour. ⁣
⁣
If you’re even missing just one of those pieces, like with a puzzle it will be hard to complete it.⁣
⁣
What I’m getting at:⁣
⁣
Working on your Text Game without having a good profile or with a horrible Mindset, is like shooting yourself in the foot.

(obviously not just with a water gun

) ⁣
⁣
Yes, you might get some success, but it will be significantly less than if you had a great profile to back it up.⁣
⁣
Your profile is like your business card, it matters more than anything else. ⁣
⁣
Only once your profile is on point, it makes sense to focus on the other very important aspects of Online Dating.⁣
⁣
When it comes to your mindset, that decides about how you’ll interpret messages you receive from women.⁣
⁣
And therefore obviously also how you’ll react to them.⁣
⁣
The Date behaviour piece is quite self explanatory, so I don’t think I need to get into this much.⁣
⁣
Even if your mindset, profile and texting are great.. ⁣
⁣
if you don’t know how to behave on the Date, the woman will still not want to become a part of your life in any way.⁣
⁣
Now having gotten this out of the way, let’s continue.⁣
⁣
I witness it all the time in Facebook groups:⁣
⁣
Men posting a profile of a woman they matched with, asking other random men what they could say to her. ⁣
⁣
Then someone tells them what to send to the woman. ⁣
⁣
Afterwards they’re back showing what she replied and asking what they should say to her now. ⁣
⁣
There are three main outcomes of this, none of them is positive.⁣
⁣
𝗦𝗰𝗲𝗻𝗮𝗿𝗶𝗼 𝟭 – 𝗧𝗵𝗲 𝗹𝗶𝗻𝗲𝘀 𝘄𝗼𝗿𝗸⁣
⁣
Let’s imagine that our friend (let’s call him Max) gets help from an experienced guy inside a Facebook group and his lines work. ⁣
⁣
So Max who’s copy pasting those lines ends up going on a Date with the woman. ⁣
⁣
However, the woman expects the person she was texting with (basically the person helping him out) to go on the Date.⁣
⁣
Now two things happen:⁣
⁣
1. The woman will lose interest immediately, because she was expecting to meet a confident, creative and humorous man, but got an introverted, uncreative and boring one.⁣
⁣
Don’t get me wrong. ⁣
⁣
it wouldn’t even have mattered much, if she knew what she was in for, because it would have been her decision.⁣
⁣
But now she’ll want to politely end the date or come up with some kind of excuse and ghost him afterwards.⁣
⁣
2. Max will blame himself and think that something is wrong with him because the woman lost interest.⁣
⁣
He’ll look for the problem internally, instead of the fact he just copy pasted lines someone else gave to him.⁣
⁣
Trying to figure out the reason for her loss of interest, resulting in a downward spiral of negative self-talk and focusing on the wrong factor. ⁣
⁣
And when you think it couldn’t get any worse, both of those points lead to his own and the woman’s time basically having been wasted. ⁣
⁣
𝗦𝗰𝗲𝗻𝗮𝗿𝗶𝗼 𝟮 – 𝗧𝗵𝗲 𝗹𝗶𝗻𝗲𝘀 𝘄𝗼𝗿𝗸 𝗳𝗼𝗿 𝗮 𝘄𝗵𝗶𝗹𝗲⁣
⁣
So let’s imagine that Max got lines from a very experienced person and they worked well until mid conversation. ⁣
⁣
He seemed confident, attractive, dominant and fun.⁣
⁣
Now he decides to write something on his own as he thinks he could be himself now or because the guy stopped replying for some reason.⁣
⁣
But It’s like the complete opposite. ⁣
⁣
Max is starting to write boring, rational messages and interview the woman, because he doesn’t know better as he has no real experience. ⁣
⁣
What happens now, is that the woman will wonder why there’s such an incongruence between his messages.⁣
⁣
She’ll think something is wrong, lose interest and focus on other men who have been authentic and congruent throughout the entire conversation.⁣
⁣
Again resulting in Max blaming himself (or maybe even initially the lines), which obviously is the completely wrong thing to focus on.⁣
⁣
𝗦𝗰𝗲𝗻𝗮𝗿𝗶𝗼 𝟯 – 𝗧𝗵𝗲 𝗹𝗶𝗻𝗲𝘀 𝗱𝗼𝗻’𝘁 𝘄𝗼𝗿𝗸⁣
⁣
Max tried out the lines someone gave to him and they didn’t produce the results he expected. ⁣
⁣
Now he will just blame the lines that didn’t work because it is the most obvious to him.⁣
⁣
Instead of considering that there might also still be a lot of room for improvement in his profile or his Mindset.⁣
⁣
Maybe he will even blame the woman and say she’s boring, a time waster, attention bitch, just looking for Instagram followers, etc.⁣
⁣
I know, it’s always easier to blame others than take full responsibility for your own actions and the resulting outcome.⁣
⁣
However, the problem with this is that you shouldn’t blame external things that are outside of your control. ⁣
⁣
It won’t help you improve, you’ll just temporarily feel better because you found a culprit to whom you can hand over responsibility.⁣
⁣
What you should do instead is focus on the factors that you can control and optimize those. ⁣
⁣
Only once you’ve done everything in your power to improve them, you may consider that the issue might lie somewhere else.⁣
⁣
𝗧𝗵𝗲 𝗧𝗲𝘅𝘁 𝗦𝘁𝗮𝗰𝗸 – 𝗼𝘂𝗿 𝗼𝘄𝗻 𝗮𝗽𝗽𝗿𝗼𝗮𝗰𝗵 𝘄𝗵𝗲𝗻 𝗶𝘁 𝗰𝗼𝗺𝗲𝘀 𝘁𝗼 𝘁𝗲𝘅𝘁𝗶𝗻𝗴⁣
⁣
What we do is help men to get a crystal clear idea of how to text with women.⁣
⁣
They won’t need us anymore after they finish our program and this is how it should be.⁣
⁣
All of you probably know the saying:⁣
⁣
“If you give a man a fish, you feed him for a day. If you teach a man to fish, you feed him for a lifetime“

⁣
⁣
It’s the same with Texting in Online Dating. ⁣
⁣
If you give someone copy paste lines, it won’t be long until he runs out of them and his true personality shines through. ⁣
⁣
The woman will lose interest immediately, because it’s not congruent and authentic.⁣
⁣
Even if the lines would work and he ends up going on a date.⁣
⁣
At the latest when the woman realizes that she was talking to a whole different person than the one that is now standing in front of her, she’ll lose interest.⁣
⁣
Throughout the entire process there needs to be a red thread where you’re always being your authentic self.

⁣
⁣
The way your profile is set up > Texting with the woman > How you behave on the date.⁣
⁣
Do you really want to depend on random men on the Internet for a lifetime.. ⁣
⁣
Telling you what to write just so you can get dates with women you desire?⁣
⁣
I doubt so.⁣
⁣
This is where our approach is completely different. ⁣
⁣
First we’re going to show you tons of our own conversations from different dating apps that resulted in dates. ⁣
⁣
Explaining you the messages, but what’s more important, the PRINCIPLES behind every message. ⁣
⁣
Because once you know WHY a message worked, it will be easy for you to come up with a similar one that fits your personality. ⁣
⁣
You will also receive worksheets with templates that make it even easier to develop your own framework. ⁣
⁣
Just like in school, because this way it’s faster to internalize the information.

⁣
⁣
But don’t worry, it doesn’t stop there. ⁣
⁣
On top, we’re going to analyze your conversations on the weekly calls and in our Dating Superheroes Facebook group. ⁣
⁣
We’ll tell you exactly why the woman ghosted you, took days to respond, responded in a negative way or whatever the issue with it might be.⁣
⁣
To the point where there’s not a single question left on the exact reason your conversation wasn’t successful. ⁣
⁣
Now here is your chance. ⁣
⁣
if you also want to be a part of our Superhero family and have us analyze your conversations in detail..⁣
⁣
Click the button below to fill out the questionnaire and schedule a free coaching call with me personally. ⁣
⁣
Schedule your free call

We’ll see if it’s a good fit for you and if you’re motivated enough to take the Dating Superhero Transformation seriously. ⁣

⁣
Since we’re going to spend our precious time helping you, we only want truly motivated men in this program.⁣
⁣
But there’s one catch, only reach out if:⁣⁣
⁣⁣

You want to create genuine, real connections with women and aren’t just looking for ONS or “Lays“.⁣⁣
⁣⁣

You are ambitious and willing to put in the time and effort it takes to become a master at Online Dating.⁣⁣
⁣⁣

You want to learn how to authentically convey your personality over text in an honest way and are aware that copy paste messages won’t help you with that.⁣⁣
⁣⁣

You understand that this isn’t just a simple service, but a coaching that’s going to change your dating life completely.⁣⁣
⁣⁣
If you identify with those points, let’s get you rock-solid results and make 2022 your year.⁣
⁣
To your future transformation.