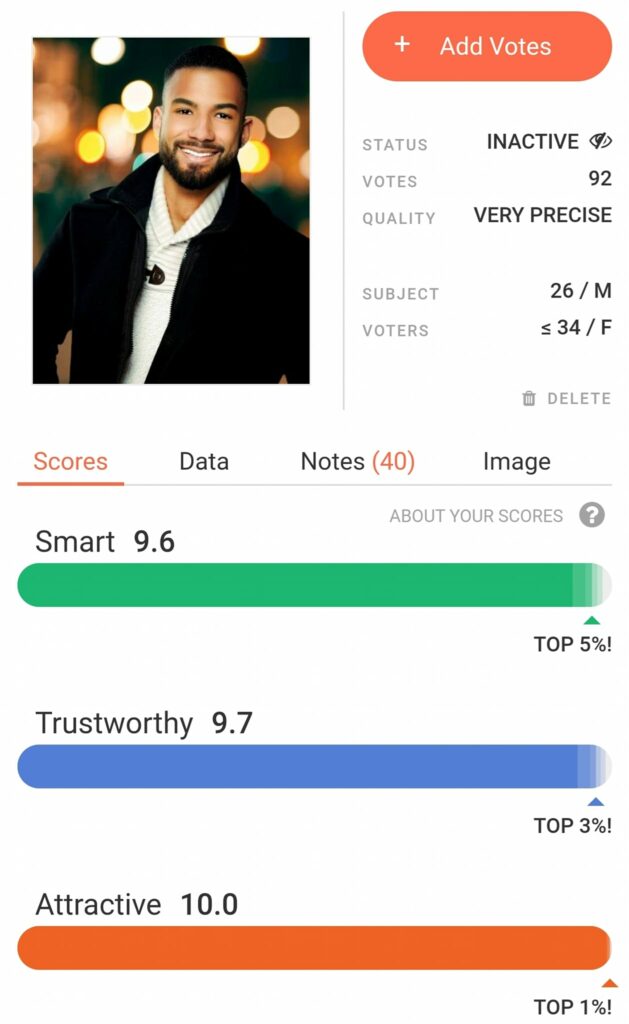 Men often ask me what I think about a popular photo rating website called Photofeeeler. ⁣
⁣
On that website you can let women rate your pictures on a scale of 1-10 in 3 categories:⁣
⁣
● Attractiveness⁣
● Trustworthiness⁣
● Smartness⁣
⁣
While I think, that it’s an okay baseline, there are way too many men thinking that those votes reflect the reality. ⁣
⁣
My goal today is to explain you, why the results of that service should be treated with a grain of salt. ⁣
⁣
First and foremost, Photofeeeler should ONLY be used for pictures of yourself. ⁣
⁣
It wasn’t created for testing lifestyle or social pictures.⁣
⁣
Now let’s continue.⁣
⁣
𝗠𝗶𝘀𝘀𝗶𝗻𝗴 𝗽𝗶𝗲𝗰𝗲𝘀⁣
⁣
The biggest flaw about Photofeeeler is in my opinion the fact, that the pictures are being tested without taking the entire profile in consideration.⁣
⁣
Women can only see and vote on one picture at a time on there, while women on Online Dating apps see and judge your entire profile. ⁣
⁣
One single picture by itself can give an entirely different impression, than it could if it were included in a profile.⁣
⁣
Let’s take for example a completely nerdy looking picture.

⁣
⁣
By itself, it probably won’t rate high in attractiveness.⁣
⁣
But included in a profile with many masculine looking pictures, it shows a different, softer side and will therefore improve the profile.⁣
⁣
That side is needed to balance it out. ⁣
⁣
You always want to avoid coming across as one dimensional.⁣
⁣
As you know, I’m all about showing different shades of your personality in Online Dating. ⁣
⁣
Not necessarily 50, but at least a few.

⁣
⁣
So women who are voting on a picture on Photofeeler, won’t be able to take the „bigger picture“ in consideration.⁣
⁣
𝗨𝗻𝗸𝗻𝗼𝘄𝗻 𝗗𝗲𝗺𝗼𝗴𝗿𝗮𝗽𝗵𝗶𝗰 ⁣
⁣
The second thing that I consider a BIG flaw, is that you never know what kind of demographic votes on your pictures.

⁣
⁣
It could be unattractive women who live on the other side of the world, are far from your type and in no way representative of your target audience.⁣
⁣
Let’s imagine you’re only into Caucasian women like myself, would you ask black or asian women for their opinions?⁣
⁣
No you wouldn’t, because it won’t help you at all in attracting those Caucasian women that you’re into.⁣
⁣
It’s comparable to asking a doctor about his opinion on an airplane blueprint.

⁣
⁣
It won’t get you anywhere. ⁣
⁣
Having talked about the things that I consider flawed, I would still recommend Photofeeler. ⁣
⁣
It’s a good tool to get an opinion on which of your pictures makes a better overall impression to women in general. ⁣
⁣
For that it’s very helpful and gives great insights, because the women voting on them are strangers and unbiased.⁣
⁣
I often see men having 10 votes and thinking that those are representative in any way, but that’s not the case.