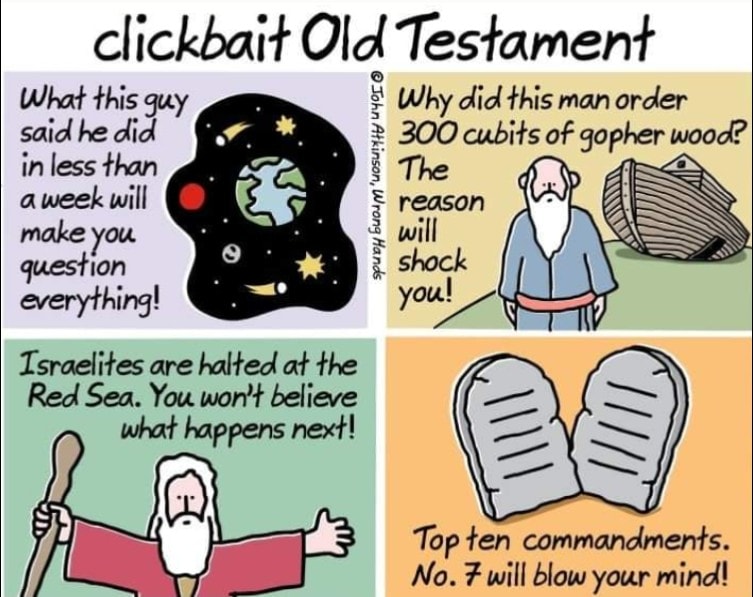 The attention span of women on Online Dating apps is extremely low. ⁣
⁣
So it’s absolutely vital, that your profile catches their attention from the first millisecond on.⁣
⁣
Some of the tools to achieve that are:⁣
⁣
● Signal words⁣
● NLP prompts⁣
● Plot Twists ⁣
⁣
Let’s jump deeper into what the hell that is, shall we?⁣
⁣
𝗖𝗹𝗶𝗰𝗸 𝗯𝗮𝗶𝘁 𝗶𝘀 𝘆𝗼𝘂𝗿 𝗳𝗿𝗶𝗲𝗻𝗱⁣
⁣
I bet you’ve been in this situation.⁣
⁣
You’re working on your computer, you’ve got a certain task to complete.

⁣
⁣
But then all of a sudden you see some silly article headline:⁣
⁣
“Naked images of Zac Efron leaked! You won’t believe the size of his best friend!”⁣
⁣
Or⁣
⁣
„Naked Images of Scarlett Johansson leaked! You won’t believe her actual size!“⁣
⁣
Damn you’re thinking…⁣
⁣
You’re quite tempted to give the 2nd link a click, aren’t you?⁣
⁣
Just a quick look at the photos and then you’ll close the tab and go back to work.⁣
⁣
That’s what most people would do.⁣
⁣
It’s exactly why the internet is FLOODED with clickbait.⁣
⁣
The psychological principle of curiosity is just too powerful.⁣
⁣
We can make use of exactly the same click-bait principle to hook women in, so they look at our profile.⁣
⁣
Some of the Signal words to use could be:⁣
⁣
● Attention!⁣
● Caution!⁣
● Warning!⁣
● Don’t read the next sentence!⁣
⁣
Here’s a sweet example for you, because I know how much you love them:⁣
⁣
„Warning! Once you hear my Will Smith Imitation, you’re probably going to want to marry me.“

⁣
⁣
Our brain is wired in a way to immediately notice words like caution or attention. ⁣
⁣
We can’t help it but pay attention to them.⁣
⁣
Same goes for the following..⁣
⁣
𝗧𝗵𝗲 𝗽𝗼𝘄𝗲𝗿 𝗼𝗳 𝗡𝗟𝗣 𝗽𝗿𝗼𝗺𝗽𝘁𝘀⁣
⁣
Adding NLP prompts at the beginning of your profile is another very powerful way to grab women’s attention.⁣
⁣
Now you’re probably thinking to yourself: ⁣
⁣
„WTF Sandric, can you already stop making use of abbreviations? I don’t understand shit.

“ ⁣
⁣
Dont worry, I’ll explain the meaning to you in a second. ⁣
⁣
NLP stands for „Neural linguistic programming“. ⁣
⁣
It’s a very effective combination of linguistics and psychology. ⁣
⁣
Without going too much into the details, but when we hear phrases like ⁣
⁣
„Imagine that..“ or „Listen..“⁣
⁣
Our brain automatically follows those prompts and is much more attentive and receptive for what comes afterwards.⁣
⁣
𝗠𝗮𝘅𝗶𝗺𝗶𝘇𝗲 𝗵𝗲𝗿 𝗰𝘂𝗿𝗶𝗼𝘀𝗶𝘁𝘆⁣
⁣
This is something I haven’t initially announced to cover, but I thought it’s nice to have in your toolkit.

⁣
⁣
By including open sentences in your bio like:⁣
⁣
„Do you know what’s really the worst..“ ⁣
⁣
You can increase the curiosity level even more. ⁣
⁣
We humans react with enormous attention, when we hear incomplete information. ⁣
⁣
So when we hear a sentence that has been started but not finished, our brain wants to complete it no matter what. ⁣
⁣
That’s why you’ll definitely have a woman’s attention if you start your profile with such a sentence. ⁣
⁣
She won’t be able to help herself but continue reading the next one. ⁣
⁣
𝗦𝗵𝗼𝗰𝗸 𝗵𝗲𝗿 𝘄𝗶𝘁𝗵 𝗮 𝗣𝗹𝗼𝘁 𝘁𝘄𝗶𝘀𝘁⁣
⁣
The last principle I’ll talk about is one of my favorite ones. ⁣
⁣
Begin your bio with a strange and extremely surprising fact or story.⁣
⁣
Let me give you an example:⁣
⁣
„I always keep a loaded gun on my nightstand in the event of an intruder“

⁣
⁣
This could be the first part that’s going to produce a curious WTF effect in the woman’s mind.⁣
⁣
It’s what you want, as that makes you stand out from the crowd.⁣
⁣
Obviously she’ll want to know, why it is that you’re keeping a gun on your nightstand.⁣
⁣
But in a case like this, it’s important to immediately follow it up with the resolution. ⁣
⁣
Just so she doesn’t assume you’re a creepy weapon fanatic.⁣
⁣
Now let’s continue with the second part:⁣
⁣
„so I can shoot myself to avoid meeting new people.“⁣
⁣
After this second part, the woman will probably experience emotions of relieve, happiness, laugh out loud and be more attracted to you. ⁣
⁣
With this little plot twist alone, you showed her that you’re different, creative and hilarious.⁣
⁣
All that without being boring like 99% of the other guys in Online Dating and simply writing „I’m creative and funny“ into your bio. ⁣
⁣
You basically just unleashed the true Power of „Show don’t tell“.⁣
⁣
We finally arrived at the end of this novel.

⁣
⁣
Those principles are usually only being used by Marketing and Sales experts, but now they’re part of your toolkit as well. ⁣
⁣
Cheers, ⁣Sandric