Have you ever heard about racism and prejudices in Online Dating? 💥⁣ 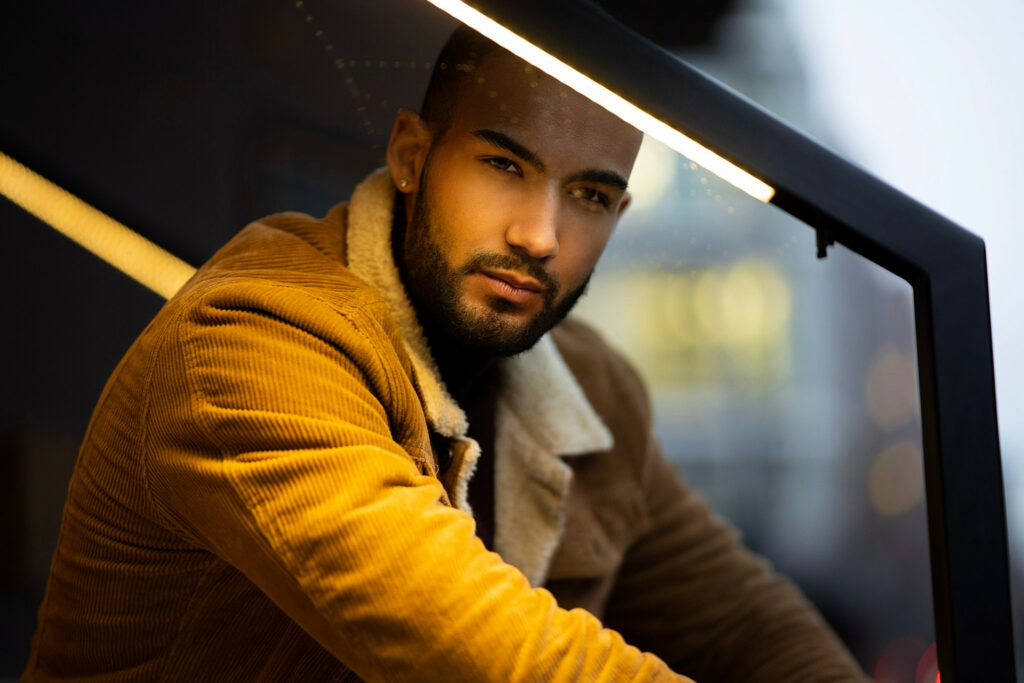 I discovered some articles about racism that made me realize that it’s time to cover the topic of prejudices and racism in real life and Online Dating that influence the lives of so many people from different origins. ⁣⁣⁣⁣
⁣⁣⁣⁣
Yes your ethnicity and origin matter a lot, even though many people don’t want to realize it and talk it down. ⁣⁣⁣⁣
⁣⁣⁣⁣
Most Online Dating Coaches have an “one size fits all“ approach, but this doesn’t work. ⁣⁣⁣⁣
⁣⁣⁣⁣
Let me give you an example:⁣⁣⁣⁣
⁣⁣⁣⁣
One of my students that I’m currently coaching is Asian.⁣⁣⁣⁣
⁣⁣⁣⁣
He had a photoshoot with a “Tinder Photographer“ from Sweden and that photographer promised him a life changing experience, more likes and matches.⁣⁣⁣⁣
⁣⁣⁣⁣
However, after their photoshoot NOTHING changed and the guy felt scammed.⁣⁣⁣⁣
⁣⁣⁣⁣
When he confronted the photographer, he just blamed the algorithm instead of taking responsibility for his bad service.⁣⁣⁣⁣
⁣⁣⁣⁣
The reason why his results didn’t improve is, because the photographer runs a “One size fits all“ approach and doesn’t consider the individual situation, background and ethnicity of his clients.⁣⁣⁣⁣
⁣⁣⁣⁣
𝗘𝘅𝗮𝗺𝗽𝗹𝗲𝘀 𝗳𝗿𝗼𝗺 𝗺𝘆 𝗼𝘄𝗻 𝗹𝗶𝗳𝗲⁣⁣⁣⁣
⁣⁣⁣⁣
I had to deal with prejudices my entire life and even suffered from childhood traumas related to racism and exclusion. ⁣⁣⁣⁣
⁣⁣⁣⁣
Now I don’t want to complain here, but you need to be aware that being Asian, Indian, African, Arabic etc. basically anything else than Caucasian, you need to take a different approach in Online Dating. ⁣⁣⁣⁣
⁣⁣⁣⁣
You have to make sure that women seeing your profile aren’t able to put you into any specific category that fits a stereotype.⁣⁣⁣⁣
⁣⁣⁣⁣
It’s no secret that prejudices are a thing in our society, even more so Online than in real life.⁣⁣⁣⁣
⁣⁣⁣⁣
Because in real life you have the chance to show people otherwise by your vibe, your charisma, your personality, your voice and your entire presence. ⁣⁣⁣⁣
⁣⁣⁣⁣
However in Online Dating all that falls apart. ⁣⁣⁣⁣
⁣⁣⁣⁣
But let me tell you about a few of the situations that I run into in Germany and Online Dating so you understand me better. ⁣⁣⁣⁣
⁣⁣⁣⁣
𝗣𝗿𝗲𝗷𝘂𝗱𝗶𝗰𝗲𝘀 𝗮𝗻𝗱 𝗿𝗮𝗰𝗶𝘀𝗺 𝗶𝗻 𝗿𝗲𝗮𝗹 𝗹𝗶𝗳𝗲⁣⁣⁣⁣
⁣⁣⁣⁣
I was born and raised in Germany, yet I have to deal with prejudices on a daily basis.⁣⁣⁣⁣
⁣⁣⁣⁣

I speak German very fluently, yet at the beginning of a conversation, people ask me if I speak German. ⁣⁣⁣⁣
⁣⁣⁣⁣

I often hear the phrase “Wow, your German is very good“. No shit sherlock, maybe it’s because I’m German?

Sometimes people call me the “N Word“ for no reason at all.⁣⁣⁣⁣⁣
⁣⁣

My girlfriend got weird looks when she started dating me. People saying they didn’t know she was into “that kind of people“.⁣⁣
⁣⁣

When I want to enter a club, the bouncer often denies me entry. if I ask why, they just say “Sorry, not today“. Afterwards they let in all the white guys behind me.⁣⁣⁣⁣
⁣⁣⁣⁣

I once talked in German with a man from the Tax Office. He kept replying in English and this went on for the entire conversation, until I got angry and pointed out 3 times that I am talking in German with him and there’s no need to talk English with me. After the 3rd time he apologized and said he didn’t realize that I was speaking in German.⁣⁣
⁣⁣⁣⁣⁣

When I was a kid, the other kids in school didn’t want to play with me because I was the only one who wasn’t white.⁣
⁣⁣⁣⁣

The teacher often made me sit on a chair in the corner even though I didn’t do anything at all, I was a reserved kid that never caused any trouble. This even happened in a Catholic school, where you wouldn’t expect it.⁣⁣⁣⁣
⁣⁣⁣⁣

One time I was sitting at the Alster lake in Germany with a friend cracking jokes, we both have black humor. Suddenly a white guy sat next to us and when my friend made jokes about me, the guy said “You don’t make jokes about black people, it’s not their fault they’re handicapped“.⁣⁣⁣⁣
⁣⁣⁣⁣

I was in the City center, looking for a sports store that a friend recommended to me. I went up to a woman (I think she was around 25 years old) and wanted to ask her if she knew where the store was. ⁣⁣⁣⁣
⁣⁣⁣⁣
Before I could even open my mouth she said “Sorry I got no change“ and walked away. ⁣⁣⁣⁣
⁣⁣⁣⁣
I was wearing a coat and boats that day, so I didn’t look homeless at all. ⁣⁣⁣⁣
⁣⁣⁣⁣

One time at Zara which is a clothing store, I was standing in line next to a woman. She assumed I wanted to rob her and quickly hid her purse, while looking at me as if I were a criminal.⁣⁣⁣⁣
⁣⁣⁣⁣
That’s about it, there’s probably more situations I don’t remember, so let’s continue with Online Dating. ⁣⁣⁣⁣
⁣⁣⁣⁣
𝗣𝗿𝗲𝗷𝘂𝗱𝗶𝗰𝗲𝘀 𝗮𝗻𝗱 𝗿𝗮𝗰𝗶𝘀𝗺 𝗶𝗻 𝗢𝗻𝗹𝗶𝗻𝗲 𝗗𝗮𝘁𝗶𝗻𝗴⁣⁣⁣⁣
⁣⁣⁣⁣
In Online Dating those prejudices are different, because there you’re only being judged based on your pictures and bio.⁣⁣⁣⁣
⁣⁣⁣⁣

If my bio wasn’t in perfect German grammar, women would assume I don’t speak German and I am a tourist. ⁣⁣⁣⁣
⁣⁣⁣⁣

If I didn’t have a picture with a white person in my profile, I would get 50% less likes because women would assume I’m not “integrated“ in society.⁣⁣⁣⁣
⁣⁣⁣

If I had a picture wearing a leather jacket or hoodie, women would assume I’m a drug dealer or gangster even though the picture looked amazing and if a white guy took the same one he would be seen as a celebrity.⁣⁣⁣
⁣⁣⁣⁣

If I only had pictures of myself but none that show a life, I wouldn’t get any likes and women wouldn’t trust me. ⁣⁣⁣⁣
⁣⁣⁣⁣
Now if a Caucasian good looking guy only has pictures of himself, it wouldn’t matter.⁣⁣⁣⁣
⁣⁣⁣⁣
It’s in our biology, that people would rather spend time with and trust others faster if they’re from the same ethnicity/similar to them.⁣⁣⁣⁣
⁣⁣⁣⁣
So by no means I’m blaming the women for it. ⁣⁣⁣⁣
⁣⁣⁣⁣
A woman seeing a profile doesn’t consciously have those prejudices, they work subconsciously in a split second. ⁣⁣⁣⁣
⁣⁣⁣⁣
Maybe depending on something that her friends experienced, she heard or a situation that happened in her life before.⁣⁣⁣⁣
⁣⁣⁣⁣
A German friend of mine who’s equally as good looking as me but just white, had 3 pictures where he was only posing and that conveyed absolutely nothing about his life or personality: ⁣⁣⁣⁣
One selfie, one picture standing and one very posed picture sitting while looking at his phone. ⁣⁣⁣⁣
Yet he got 5 times as many quality matches as I did with an amazing profile that I worked on for 6 years and that covers every single important aspect.⁣⁣⁣⁣
⁣⁣⁣⁣
I want to emphasize again that I didn’t write this post because I want you to pity me. ⁣⁣⁣⁣
⁣⁣⁣⁣
I just want to spread awareness about this very important topic that’s often overlooked. ⁣⁣⁣⁣
⁣⁣⁣⁣
Now I can already hear some guys saying:⁣
⁣
“Yeah, but you’re a black guy living in a white country like Germany. So of course you have to deal with prejudices.“⁣
⁣
However, prejudices and racism are something that exists ALL over the world without exception.⁣
⁣
In some parts to a bigger extent and in others less, but they do exist and many people suffer because of them.⁣
⁣
I recently talked to someone who didn’t even know that those prejudices are still a thing in 2020/2021. ⁣⁣⁣⁣
⁣⁣⁣⁣
And when I look back at what I wrote, I’m also shocked that this is our reality. ⁣⁣⁣⁣
⁣⁣⁣⁣
I hope I was able to open your eyes because that was my only goal. ⁣⁣⁣⁣
⁣⁣⁣⁣
Please share this article with any person you think needs to realize that not everyone is being treated equally in the dating world.⁣⁣⁣⁣
⁣⁣⁣⁣
Hopefully it will reach many people and lead to more awareness.⁣⁣⁣⁣
⁣⁣⁣⁣
Cheers, ⁣⁣⁣⁣
Sandric